You are currently browsing the archives for the References category.

Archive for the ‘References’ Category

One of our earliest clients, Flor Valentin in Centro Idea by the road from Fuengirola to Mijas Pueblo, needed to update the half decade old design of their website. We added a simple webshop for online orders with local delivery, including credit card payment. The owner also wanted to focus more on weddings that has now become an important part of their business. Reine Johansson designed a suggestion and together with the owner, Janne Valentin we created a clean design where the creations of the florist take the center stage. We hope for another half dozen of years as Flor Valentin’s web partner! 🙂

StartGroup Real Estate is the Official Sales Partner for the development  Fairways La Cala Golf. They needed to setup a site to present the development and allow for clients and other agents to download media. Webdesign Costa del Sol came up with a design based on sketches from StartGroup, adjusted it according to feedback, implemented and installed the web site.

The website contains project 3D renders, slideshows and a separate private section for agents to login and download additional information. The priorities of the website project was, as always, quality, followed by a swift development. This time extra functionality had to give way for mentioned priorities. 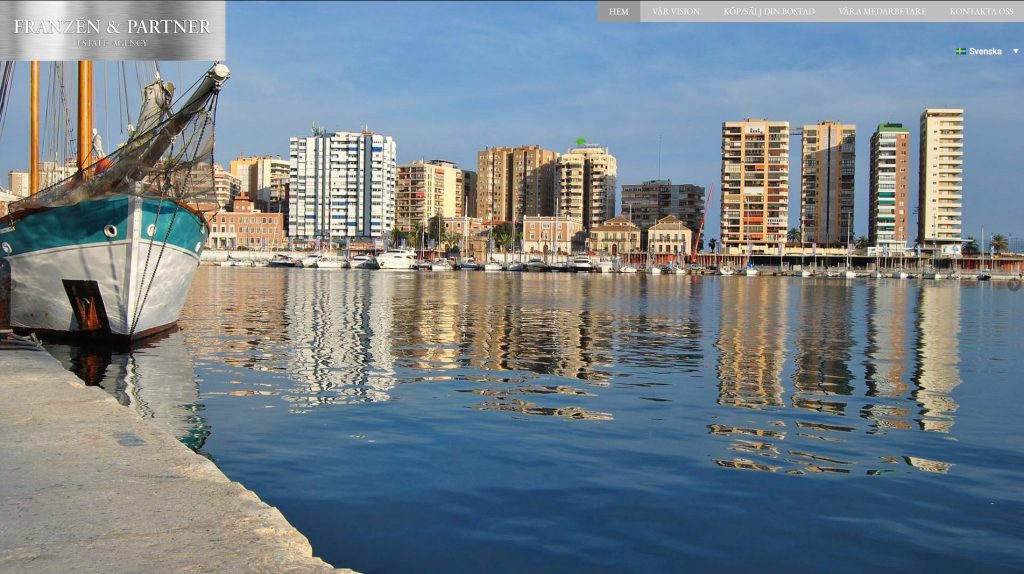 Franzén & Partner is a completely new real estate agent in Fuengirola. The owner knew Webcostas work from previous clients and turned to us for getting their website up and running as soon as possible. To speed up the launch, we opted for a third party template which was adapted to suit F&P’s needs.

Around New Year 2018, we released StartGroup’s new website. StartGroup is the leading real estate agent in Calahonda, specializing in Calahonda and surrounding areas like La Cala, Riviera del Sol, Miraflores but of course they list properties and help clients find property all over the Costa del Sol.

StartGroup wanted the new website with improved usability and easy administration. Mobile adaptation was of course an important requirement. Reine created a new design from scratch, based on their existing graphic profile from ads, catalogues etc.

The website has a real time interface to a Property Management System to search properties for sale among colleagues, an administration system for content and to handle proprietary data on selected properties. The site is multilingual and supports Virtual visits, Youtube videos for own listings. We look forward to continuing working with StartGroup on SEO and Adwords marketing!

One of Fuengirola’s leading real estate agents, Alamo Costa del Sol, wanted to update their design for a website delivered by Webcosta. We took the design suggestion and implemented it onto the existing backend solution including search functionality, administration system and so on. New and fresh on the outside – familiar, stable and time tested on the inside! 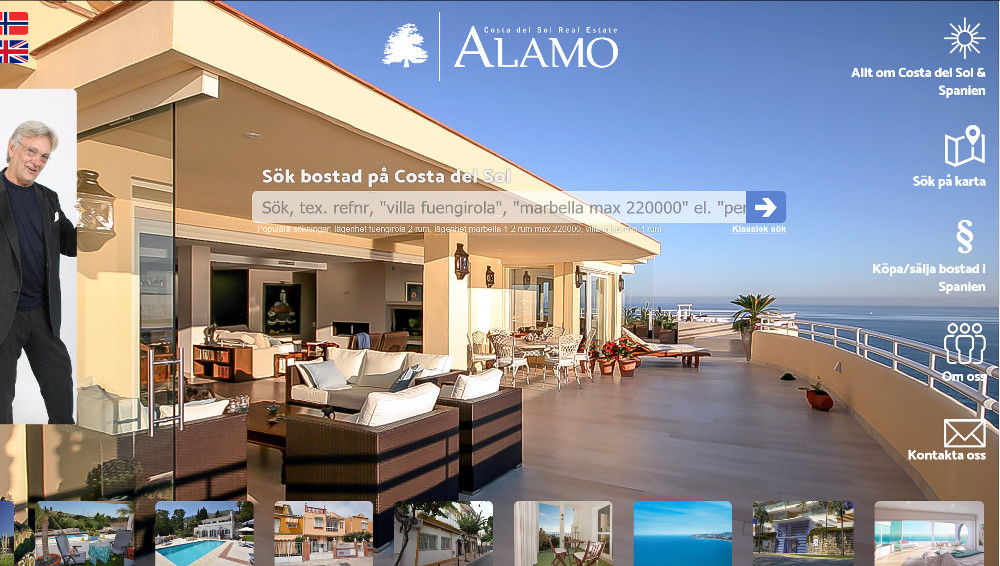 We had been doing the Search Optimization (SEO) for Alamo Costa del Sol for a while when we realized they needed a new custome. Reine at Webdesign Costa del Sol came up with a pretty radical design that got Sven at Alamo firing on all cylinders. With some feedback and adaptations, that was the starting point for Alamo’s new website. The most important goal for the new website was increasing engagement and buyer leads. The measures to acheive that goal were:

All measures were implemented and we have seen a sharp rise in number of queries from the website. 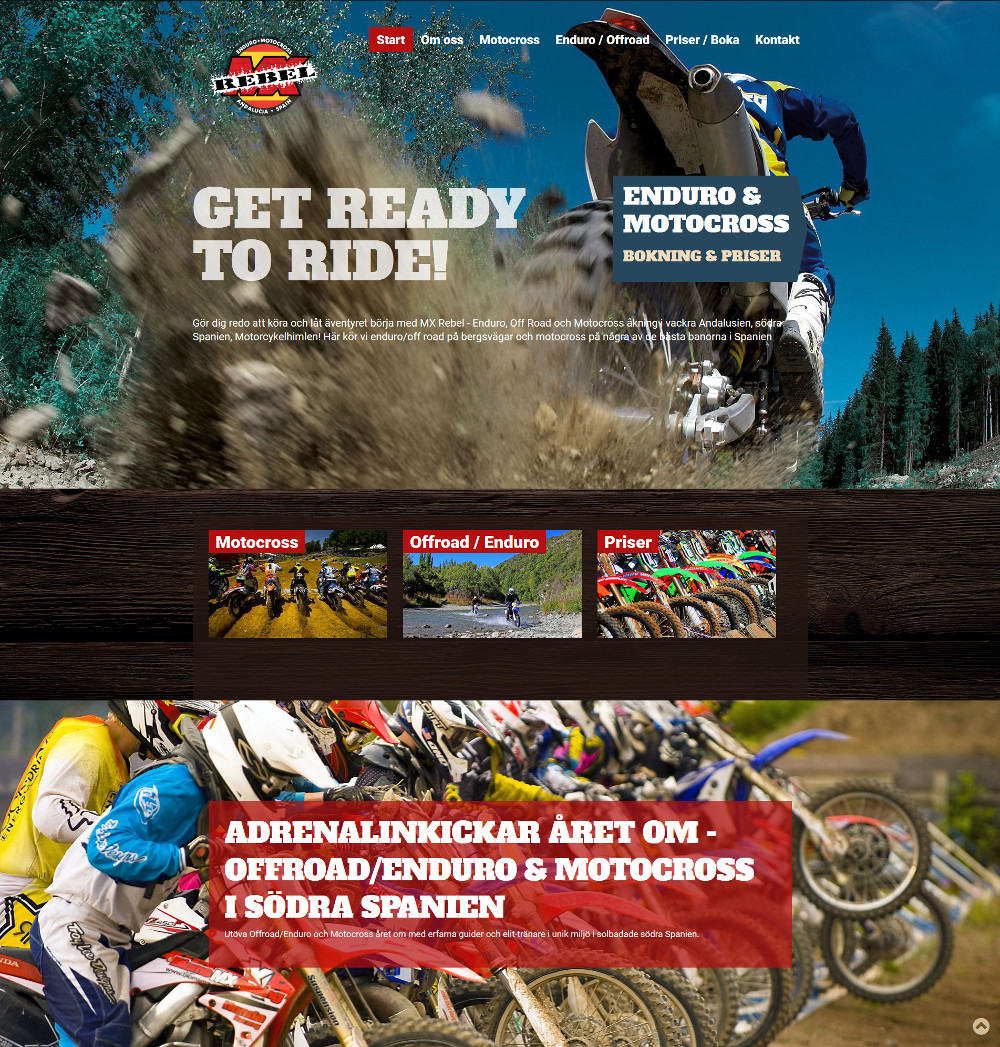 Long time motocross and enduro enthusiasts, coaches and entrepreneurs Chris and Stefan started the business MX Rebel, arranging motocross camps and guided motorcycling adventures in the Andalusian landscape. The website needed to convey the sense of excitement and action that their customers experience and at the same time be clear and easy to navigate. I think we nailed it! What do you think? Share your thoughts on our facebook-sida! 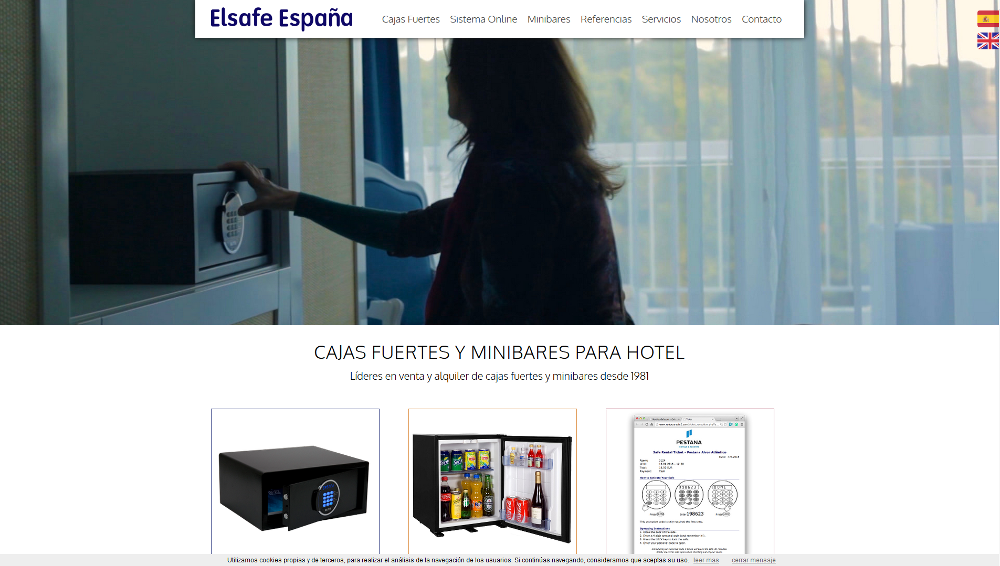 Elsafe España has delivered hotel safes to hotels since 1981. Lately, they have constructed a unique management for hotel safe rentals, where the receptionist creates a rental in seconds and the manager has full overview of existing rentals. Elsafe delivers safes to several countries, but a majority of their clients are Spanish or Portuguese. To position themselves better, Elsafe decided to build a new website. Webdesign Costa del Sol built an airy and modern design, presenting the company’s two main product groups; safes and minibars, and their rental management services. Among other features, the website is mobile adapted through responsive design and uses lazy load for faster loading. 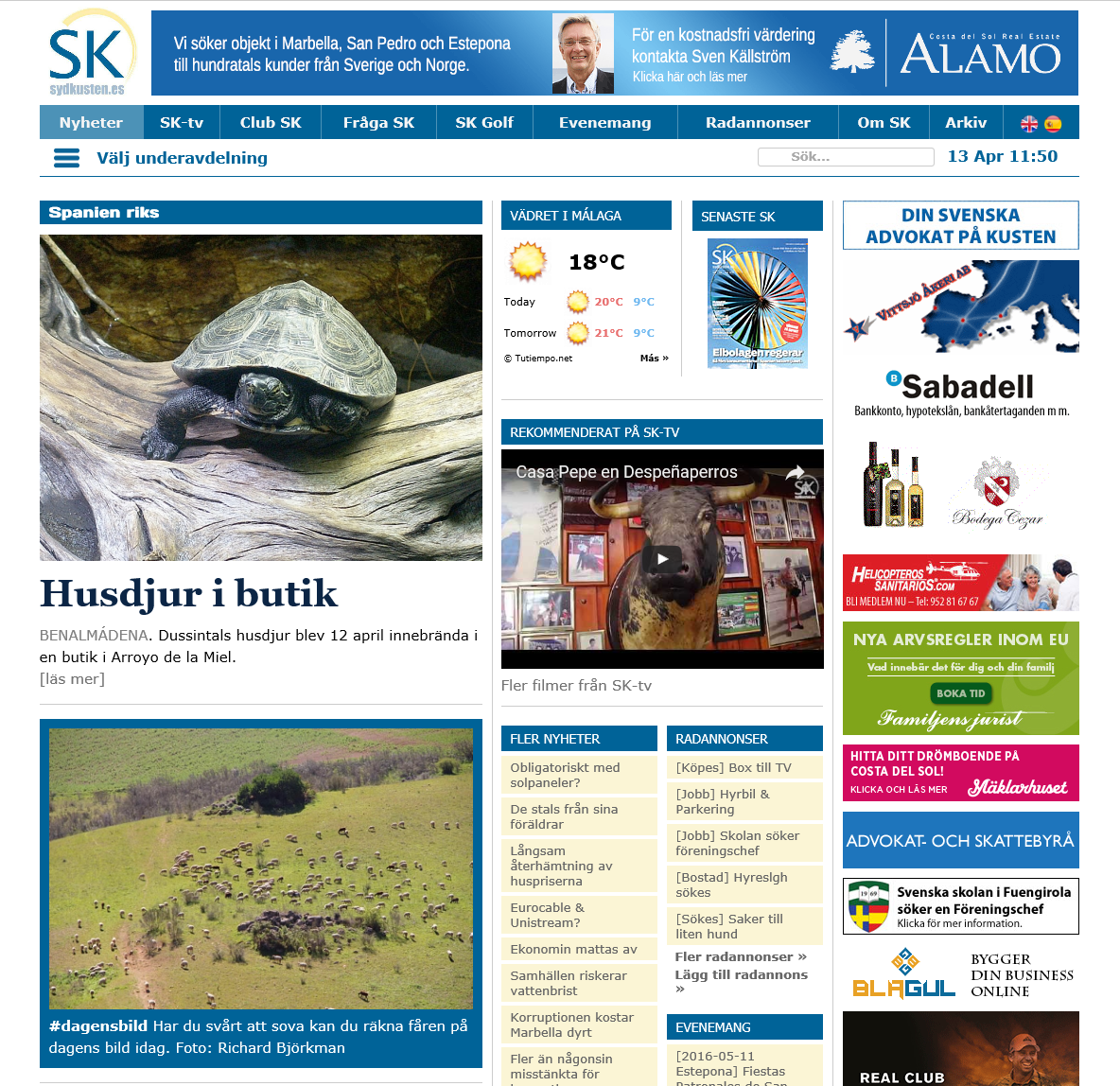 The largest Swedish newspaper on Costa del Sol, Sydkusten, needed (really needed!) a new design. The previous design had been created at some time in the nineties. It was quite a feat that the site was still running on the same system more than a decade later, but now that mobile users being an ever increasing market share, the Björkman brothers decided to renew the whole layout. In april 2015, Google adjusted their search algorithm to punish sites that are not mobile adapted in mobile search results. Since then, if your business is local and suitable for mobile searches, you risk losing clients if your site is not mobile friendly.
Since Webcosta has been working together with Sydkusten for many years, they gave us the confidence to build the new site.

It’s a bit of a challenge to build a design for a site the magnitude of Sydkusten. The site has got many subsections and an enormous amount of content. The mission consisted in creating an easy to use design with easy access to the most commonly used content – all in a modern, sober graphical design with space for many ads.

The new site was launched September 1, 2015 and the response was unmistakable. Traffic rose 18% the first month and visitors stayed 30% longer on the site than before. Half a year later, in March, the result was even more impressive, boasting 58% more visitors than March 2015.
The effect on mobile usage was spectacular with number of visitors on mobile phones tripled, compared to the previous year!